One year ago was my first semester at The University of Texas at Dallas (UTD).  I was scared out of my mind and felt as though I had no idea of what I was doing. Other students may have said, “I am excited to be here and I can’t wait to dive into studying”. That was nothing close to what I was thinking at that time. I was a 29 year old who had been in the military for 11 years, an E-6 (Staff Sergeant) who just resigned his active duty position to attempt to go to medical school, and I was second-guessing everything.

My first semester was a shock and awe for me as an individual and student. I had a very successful career in the military, which had my confidence up coming into UTD. I thought I was going to have this smooth transition and ace all my classes. For those who have been there and are probably laughing already knowing that this did not happen at all. A few things I learned right away, UTD is a rigorous academic school (I didn’t know this when applying), right away I was overwhelmed with school. I was lost and felt like I made the wrong decision about leaving the military. Luckily, there was the Military and Veteran Center (MVC) where I could go and be around people my age and had experiences similar to me. It took me a while, but MVC became my comfort zone, where I started to talk to people and open up about how I was doing and feeling. More importantly I received help by getting recommendations about resources the school has for students and all the resources the MVC has. After getting more involved throughout the semester I was asked if I was interested in attending the Student Veterans of America conference. What military person would say no to a TDY to Los Angeles? In January 2020, a group traveled to the SVA conference with the goal of listening and learning everything we could to help improve our SVA chapter and help other student veterans.

Once arriving at the conference, I felt the energy of being with so many people that were like me. While networking with others at the conference I realized that the feelings I had transitioning to college was a normal thing.  During one session, a student discussed being president of the student government. He talked about how this organization had a huge impact, not specifically to just veterans but students as whole. Student government allowed him to help motivate his university to build resources for student veteran. When I heard this, I decided that I was going to join UTD’s student government. I wanted to make sure I could go and give back to UTD and the veterans that were currently there and the future veterans that will go through the same transition process I went through.

Once back at UTD, I went to a student government meeting to assess what they do. I quickly realized that I was the odd person in the room of 60 student senators by 6 years. I was thinking to myself, this is going to be very interesting, I’m going to be working with a bunch of E-1s (Privates) all over again. Quickly after joining student government, I learned this mentality was completely wrong. It became a very humbling experience for me as the oldest person in the room and the newest student/senator. I knew nothing about being a senator and knew nothing on what or how I could help other students. Which led to me being mentored and taught by these motivated and very intelligent young adults that I was referring to as children when I first arrived there.

During this time, I was able to learn the basic ins an outs of student government, see how involved they are with the faculty, and the impact they have to help improve students experience at UTD. This was exactly what I was looking to do when deciding to join student government. Soon after, I found myself very involved with ideas on how to improve issues for students ranging from setting up umbrella stations for students around campus, to trying to improve parking. Before I knew it, I was running around campus meeting faculty and getting asked to join other committees. I have witnessed amazing work being completed by these organizations during this pandemic, fighting for students and making sure they are taken care of and safe.

One year ago I would have never guessed that I would be feeling the way I do or be involved in the school the way I am now. It all got started after spending time in the MVC. The support I received during a time I truly needed it along with the resources they introduced me to, helped me focus and realize that this wasn’t poor life choice. Which is why I chose to get involved with student government, to get in a place where I can represent student veterans within UTD and help make changes with them in mind. I want to help improve the transition process for student veterans to give them the help and motivation I received. I am proud to be working to improving the quality of learning and life at UTD for student’s and specifically student veterans. 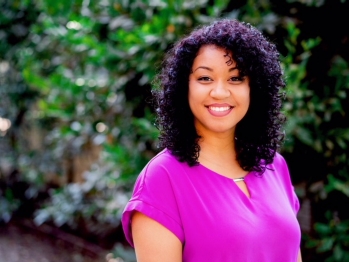