In 1991 I was a first-year student in college, and for three days in October I was transfixed by Anita Hill’s testimony before an all-White, all-male panel of senators during the confirmation hearing for Clarence Thomas. I didn’t yet know Kimberlé Crenshaw’s framing of intersectionality, but I knew that I was witnessing deep racial and gender divides in experiences with oppression and power – in particular men’s power to be believed and to deny responsibility for harm and the tightrope that Anita Hill had to walk as a Black woman in that space. At the time, and still now, I was sickened by the lack of humanity from the senators, by the humiliation Professor Hill endured, by the apparent reality that sexual harassment was no big deal – at least for those who perpetrate it.

A similar lack of humanity was on vivid display during Dr. Christine Blasey Ford’s testimony, with senators performing rather than listening, blustering rather than believing. I’ve heard multiple sources praise Senate Judiciary Committee Republicans for hiring prosecutor Rachel Mitchell to handle their questioning of Dr. Blasey Ford, presented as evidence that the party learned from the terrible optics of Anita Hill’s testimony. I’m hard-pressed to view this move as progress when 27 years after Justice Thomas’s hearing the Republicans on the Senate Judiciary Committee still are all White men.

And it wasn’t happenstance that Judge Kavanaugh’s enraged rebuttal so closely echoed that of Justice Thomas. Both men went on the attack to describe the accusations and testimonies as a “circus” and as part of an orchestrated character assassination meant to stymie their advancement. Both demonstrated utter disbelief that their trajectories might be interrupted by women who dared to speak up. Both employed strategies meant to deflect attention from ugly, detailed, credible accounts of sexual harassment and assault. Both reflected a pathological unwillingness to reflect on their own behavior and the impact they may have had on others with less power.

Several senators remarked positively on Dr. Blasey Ford’s credibility (attributable in no small degree, I believe, to her race and class), but it is now apparent that most of them chose to believe Brett Kavanaugh – that when it came down to “she said/he yelled” (nod to SNL for that description), their default was to trust his version and to prop up white patriarchy. That in spite of the #MeToo movement, the burden of proof for sexual violence is still incumbent on victims and survivors. I couldn’t help but wonder if these senators and all those who watched the hearing don’t believe Dr. Blasey-Ford, who would they believe? Or, if they do believe her, how can it not matter?

There was a palpable difference in the response to the Kavanaugh hearing. So many people saying they believe Dr. Blasey Ford and other survivors. Making connections with what went so wrong when Anita Hill testified. People mobilizing with their voices and bodies. Committing to vote in November’s midterm elections. And I see other reasons for hope on our campuses. During an event last week at Rhode Island College featuring Judy Shepard, students from the Pride Alliance drew clear and sophisticated intersectional connections in their questions to panelists. In this post, my colleagues lift up work to create more effective ways for sexual misconduct survivors to report and receive support. Colleges and universities are taking a hard look at their campus climates to address inequities in student persistence.

I hesitate to say that this work has never been more critical, because of course it’s always been important. However, with the current administration’s active dismantling of civil rights protections and a Supreme Court now positioned to enshrine those decisions, it is imperative that we continue to advocate and act collaboratively.

And if I’m honest, these past few weeks, when I wake up and think about my job, I feel angry. And heartbroken. I cry, I rage. On repeat. It’s as exhausting as it sounds.

I am certain I’m not alone in these feelings. Protests, headlines, social media, conversations with colleagues, friends, and family confirm this. I especially confront these feelings at work. I’m angry and heartbroken because every day I work with colleagues and universities to make things better for survivors. Better for everyone at these institutions, really, but especially survivors. I work with these institutions to tell survivors: please, come forward. Report officially or talk to someone confidentially. Seek the help you need. We’re making it safe for you. You’ll be believed and heard.

And now, after watching Dr. Blasey Ford’s courageous testimony and Brett Kavanaugh’s appointment to the Supreme Court, I think: they’ve made a liar out of me, and out of these institutions working so hard to help survivors. Because while you may be heard, by many, you will not be believed. Instead, you may be threatened, mocked, or shamed. You will hear all the data we know about how survivors experience trauma - non-linearly and with significant gaps - ignored by those in power. Using the same horrible narrative of the Brock Turner case, you will be told that the damage you caused to one man’s career, or his family, or his future, matters so much more than everything you’ve felt and endured and overcome since you experienced violence. And that regardless of what you risked to come forward, he may prevail. All that, that’s where the heartbreak and the rage and the exhaustion come in.

You’re probably thinking that this is the point where I’ll pivot and say: “But all those feelings just fuel me to work harder!” And you’re right, but it’s going to take a minute. I’m an optimist by nature and I believe, in the grand scheme of things, we are moving in the right direction. We’ve had #TimesUp and #MeToo and #BelieveSurvivors. To me, those are more than just hashtags. To me, they symbolize a movement and a meaningful shift that cannot be ignored or undone. But at this moment, I’m heartbroken and I’m angry. Those who know me know that I don’t say that often. I’m angry. I’m a lot of things: a public health professional, a mother, a partner, a sister, a friend. A lot of things. But I am not a liar. And I’m enraged that the wrongs of this system made me into one.

The events of the last weeks, from the testimonies of Brett Kavanaugh and Dr. Christine Blasey-Ford, to the analysis and over-analysis since, have left me shocked, to say the least. I come to my work at NASPA after working at three different institutions over the past 14 years, most of which was spent working with student survivors of violence. I have worked at institutions where, when I arrived, the response to a report of sexual violence was for someone in conduct to “have a stern talking to” with the accused student. And I have also been at institutions with well-resourced prevention and response offices that have led the campus in culture change around issues of consent, sexual and dating violence and stalking. We have made a significant amount of progress in responding to instances of sexual misconduct as a profession. And I have often said that in many ways, campus responses to sexual misconduct are leading the way in changing our national culture about expectations surrounding consent.

I thought we were making progress. I sat alongside students in the American Government and Women in Politics classes that I teach and watched both sets of testimony before the Senate. I thought it would be a teachable moment. And it was. For me. Maybe all of my work on campus had made me soft. Maybe I assumed that we all now agree that asking a victim if she was drinking is off the table. Inappropriate. Or maybe I thought that everyone has heard Dr. Rebeccca Campbell’s lecture on the neurobiology of trauma and recognizes that memories of trauma come in fragments and disjointed pieces and aren’t, in fact, a reason to discredit a survivor’s account.

I have sat with hundreds of survivors over the years, through their tears and their fears about reporting. I felt good about the progress that has been made on behalf of survivors and victims’ rights on campus. In fact, I left my campus work to continue to push forward on these issues at the national level with NASPA. And perhaps I am guilty of living in a higher ed bubble. I realize we still have a long way to go on campus before we have safe environments for students, free from violence for all survivors, regardless of sexual orientation, race, class or ethnicity. We have nearly daily reminders of that. But I had no idea, until last week, how far behind we have left the rest of our culture on this topic.

The result of all of this is that I have watched my Facebook feed explode with stories of campus advocates and prevention educators who simply can’t keep up with the number of students coming in to seek support. Or those survivors who, surrounded by public statements about believing women, have decided to come forward to disclose their own assault in the wake of these hearings. I desperately want to send virtual hugs to each and every one of my colleagues who is bearing the burden of the aftermath of the hearings on their campuses. The people who do this hard work every day - many of whom have experienced their own trauma, but who go to work every day to support the students in crisis who need them.

I am grateful for the difficult work that those colleagues do every day, and especially in recent days, to support survivors so that they know they are believed. I am heartened by the outpouring of support for Dr. Blasey-Ford, and I am (almost) ready to ask myself what more I can do to ensure that we continue to make forward progress on believing and supporting sexual assault survivors everywhere. 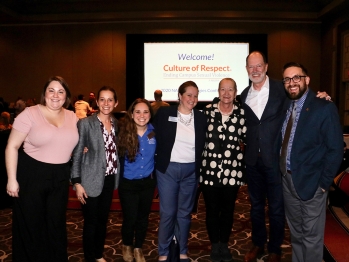