On September 24, 2019, the Department of Labor released its final “Defining and Delimiting the Exemptions for Executive, Administrative, Professional, Outside Sales and Computer Employees” rule. For student affairs professionals, this final rule represents an anticlimactic end to a three-and-a-half-year process that began when the Obama DOL released a final Overtime Rule in 2016. While the rule released last week represents a long-overdue update to several key wage and income thresholds, other aspects of the regulation determining who and when employees are owed overtime compensation remains unchanged.

Under the Fair Labor Standards Act (FLSA), first enacted into law in 1938, employees not considered exempt must be paid overtime (time and a half wages) for working more than 40 hours in a workweek. Three primary tests determine whether a position is exempt from overtime pay consideration. Under the duties test, an employee must primarily perform executive, administrative, or professional tasks in the regular course of their work. Under the salary level test, an employee’s regular wage must be above a specific threshold, set by the DOL through regulatory action. The final test, the salary basis test requires that workers be paid a “guaranteed minimum” amount week-to-week that is not subject to change.

In 2014, President Obama directed the DOL to update the FLSA minimum wage and overtime standards as they pertain to white-collar workers. In May 2016, the DOL released a final rule that dramatically increased the salary level test - from $23,660 to $47,476 - that go into effect on December 1, 2016. The rule also created an automatic update to the salary threshold every three years that tied the threshold to US salary data. Until the Obama DOL Overtime Rule, no guidance existed in either statute or regulation about how often or using what means the salary level test should be updated.

Higher education at large and student affairs would have been profoundly affected by the change to the salary level test. Most higher education professionals are not subject to the FLSA Overtime Rule, but the significant increase in the salary level sent institutions across the country into a frenzy of exploration and planning. Among the most pressing questions were considerations related to live-in residence life professionals, particularly as room and board, cannot usually be counted as compensation under the FLSA. In September 2016, NASPA partnered with the Association of College and University Housing Officers-International (ACUHO-I) to publish a resource and discussion guide to aid in ensuring compliance with the 2016 final rule.

In November 2016, just days before the 2016 Final Rule was to go into effect, a federal court in Texas issued a preliminary injunction against the rule, stalling implementation. The ruling focused on whether the DOL had the authority to establish an automatic update to the salary levels, and Judge Amos Mazzant of the US District Court for the Eastern District of Texas issued the injunction pending determination of the Department’s authority to do so. In August 2017, US District Judge Amos Mazzant struck down the regulation, effectively nullifying it.

NASPA signed onto comments on the 2019 Overtime Rule proposal submitted by the College and University Professional Association for Human Resources (CUPA-HR) on behalf of a broad coalition of higher education associations and the Student Affairs in Higher Education Consortium (SAHEC) speaking more directly to concerns related to challenges faced by live-in residence life professionals.

Impact of the 2019 Overtime Rule on Student Affairs 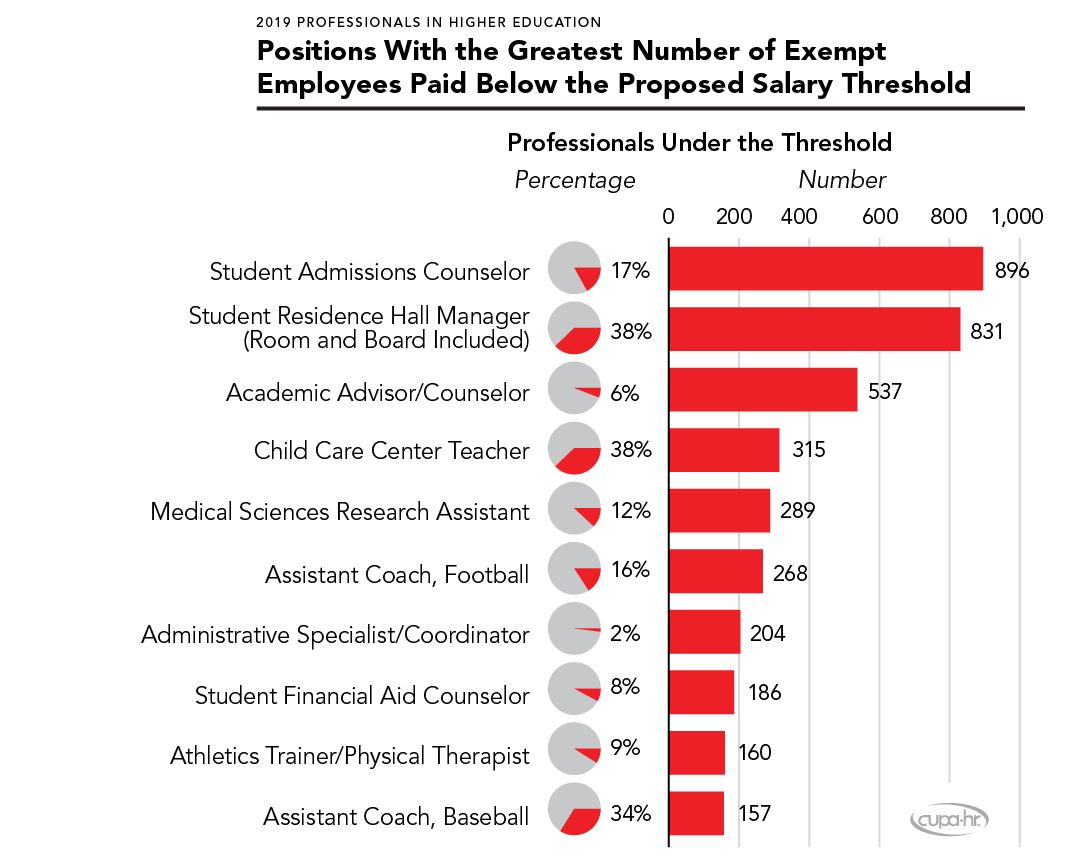 The largest proportion of professionals within student affairs that fall under the threshold are student residence hall managers for whom room and board are provided[2], with 38% of incumbents (831 individuals) earning less than $35,308. These professionals are provided room and board as part of their employment, but that compensation is not considered in determining the salary for FLSA purposes. student admissions counselors represent the highest number of affected personnel (896), but as there are more student admissions counselors than student residence hall managers, those affected represent a smaller proportion of professionals with that title (17%).

While the magnitude of the change presented by the 2019 Overtime Rule is smaller, the core questions colleges and universities must now address remain consistent with those from 2016. As institutions work over the coming months to ensure compliance with the 2019 Overtime Rule, we hope you will find the NASPA / ACUHO-I resource guide discussion prompts and analysis helpful.

[2]CUPA-HR does collect data on Student Residence Hall Managers for whom room and board is not provided by their institution, but the percentage of those individuals who would be affected by the 2019 Overtime Rule was too small for inclusion in their report.