This represents our first in a series of blog posts that will come from the African American Knowledge Community. This first edition invites conversation surrounding our name as a KC and what might be the best way to name ourselves to ensure a proper valuing of all members of our community. We will soon release details on how you might be able to contribute to our blog and start thought-provoking conversation or share much needed information or programs that we need to know about. We invite you to join the conversation on this piece with our social media using the hashtag, #WhatsInANameAAKC or #RenamingAAKC2022

“If you don’t know who you are, you’ll believe what they call you.”

“What’s in a name? That which we call a rose if called by another name would smell as sweet?”

William Shakespeare
How do you identify? When it comes to racial and ethnic identity, one may refer to themself as Black, African-American. Some might answer to both identity markers. More recently I encountered folks who could very well have multiple lineages or experiences within the diaspora like being a first or second generation African and/or Caribbean immigrant. Or different configurations that combine ethnicity and nationality could also come into play like an Afro-Latino from Brazil or someone who is Black and Japanese. And then there might still be some who might not feel any of those descriptions accurately describe them.

Setting naming conventions for defining functional areas, framing an issue or problem, and social identity groups, to name a few, is an important approach to being an intentional inclusive student affairs professional. As time goes on, our once thought monolithic community becomes all the more complex. These issues are not lost on us within the African American Knowledge Community within NASPA. We endeavor to ask some tough questions about naming, in general but also, as a serious consideration in the way that we serve our constituents here in NASPA. It is my hope in this blog that we can begin that conversation within the African diasporic community and set us on a course to a full participation from all the folks we intend to serve.

Why the need to have a collective name at all? Aren’t we in a post-racial society and shouldn’t we downplay race and ethnicity so everyone can be treated equally? Of course not. Our diversity is important to be highlighted and there are many pieces of literature debunking the idea of a color-blind society being the panacea to systemic racial inequity. As well, we would be remiss in ignoring the ways in which white supremacist societal structures produce and reproduce inequity to the detriment of folks who both fit into particular phenotypes and participants of particular cultural behaviors, language, and values.

Over the course of history, we have been called and called ourselves various things that range from the derogatory to the very individualized. Societal tensions have found the debate play out in political campaigns, on the US Census, debates about reparations and more. Higher education institutions are not unscathed in the battle to create opportunity and humanize formerly enslaved Africans. And as institutions have grown their Black student populations over the last few centuries since the first graduate of Oberlin College in 1823, the population has grown more diverse (Harper, Patton, & Wooden, 2009). The African American/Black college-going population has changed since Generation X attended in comparison with Millennials in regards to enrollment, family salary, first-generation status, and academic achievement (Strayhorn, 2012). This also means that there are many more African and Caribbean immigrant students with varying backgrounds than their counterparts with ancestors who were taken against their will in the early colonial period (De Walt, 2011; Griffin & McIntosh, 2015). This has sparked a movement called American Descendents of Slavery (ADOS) that have a heavily anti-immigrant tone in their advocacy for specific supports to only be available to American-born folks who can trace lineage to American Chattel Slavery. This is an interesting take but historians, activists and educators alike contend with this divisive view because of the ways in which global anti-Black colonization has negatively impacted the continent of Africa and Caribbean nations which are directly connected to the same oppression we experience in the United States today. As well, not many can distinguish between some of the experiences of exclusion and discrimination Africans and Caribbeans encounter in addition to, feelings of marginality and otherhing within the larger Black community as well.

Does it matter as much what the overall name is if we outline a strong mission statement that encompasses who we serve? Have we reached the status of organizations like the NAACP or UNCF where the name is so recognizable that we are better to keep it simple? Or should we be open to shifting with the potential to attain more nuanced and inclusive spaces?

Where do we go from here? 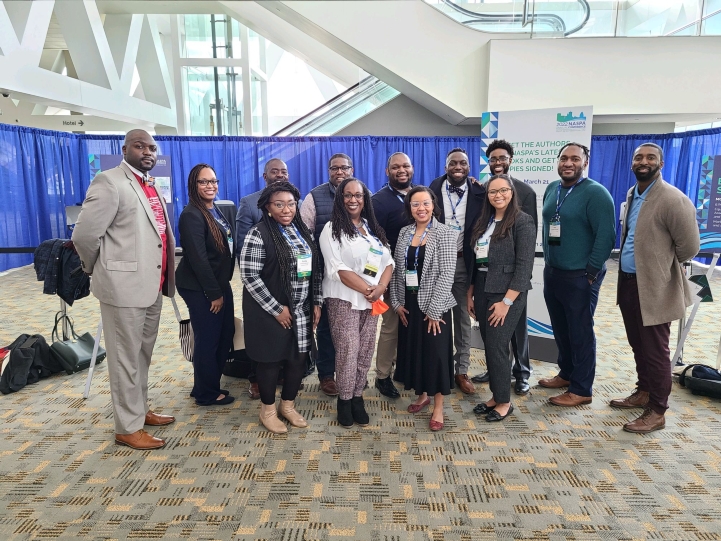