Originally signed into law by President Lyndon Johnson, the Higher Education Act of 1965 remains the most influential and important law governing federal involvement in higher education in the United States.

Nearly all federal support for higher education institutions and students, billions of dollars annually, governed through the HEA. The HEA is our nation’s largest and most comprehensive piece of legislation governing our federal investment in higher education. Student affairs professionals must engage in advocacy to support students and student aid around HEA reauthorization. The HEA reauthorization presents an opportunity to fulfill the promise and the responsibility of the federal government to students.

The most recent version of the HEA passed in 2008, and while the bill was due for reauthorization in 2013, Congress has yet to pass a new version. Committees in both chambers were working on comprehensive HEA bills for consideration this year, though there have been some disagreements across party lines. The polarization between Democrats and Republicans has contributed to the delay in HEA reauthorization, and the failure of a reauthorization so far has significant effects on higher education institutions and students.

Barriers in the Senate: Title IX

The HEA is a massive piece of legislation and, over the years, has expanded to include provisions relating not only to all federally-administered student and institutional aid, but also institutional responsibility for campus prevention and response programming, appropriate accountability for institutions, support for student civic engagement, and more. Members of Congress disagree on whether to attempt to reauthorize all aspects of the legislation at once, in a comprehensive reauthorization, or whether to move forward smaller packages of bills that reauthorize specific portions.

Comprehensive bipartisan reauthorization of a bill as large and broad as the HEA requires that the members of both parties agree on every aspect of the legislation. The breadth of issues included in the HEA can make it easier to negotiate a compromise within the bill rather than for promises of later support on other issues. However, the odds of significant disagreement on a single topic deemed non-negotiable by both parties risk stymying progress. Such seems to be the case in the Senate as bipartisan negotiations appear to have broken down over language relating to campus responsibility for adjudication of sexual harassment governed under Title IX.

Ranking member of the Senate Health, Education, Labor, and Pensions (HELP) Committee, Senator Patty Murray (D-WA) has been strongly opposed to the proposed Title IX rule released by the Department of Education. Senator Murray submitted comments in opposition to the rule during the notice and comment period and has repeatedly expressed her intention to include text in HEA that would prevent the rule from going into effect. While HELP Committee Chair Senator Lamar Alexander (R-TN) has not been as vocal on the subject of Title IX, two have been unable to agree on the issue. In June, a group of eight Senators met to work on breaking the impasse, but were unable to make significant progress and a bipartisan comprehensive reauthorization bill remains elusive.

In spring 2019, bipartisan legislation, “Fostering Undergraduate Talent by Unlocking Resources for Education Act” (FUTURE Act), was introduced in both chambers. The FUTURE Act would extend Title III reauthorization for two years. The two-year extension was set to allow time for a full reauthorization of HEA to be negotiated and passed by both chambers. NASPA joined community letters in support of the bill in both the House and the Senate and several associations advocated throughout the summer for passage of the bill, including the Hispanic Association of Colleges and Universities and the Thurgood Marshall College Fund. The bill was taken up under suspension of the rules, a process used to quickly pass non-controversial bills, in the House and passed on September 17, 2019.

On September 19, 2019, Senator Doug Jones (D-AL) asked for a vote on the House version of the FUTURE Act. Senator Alexander opposed the vote on the FUTURE Act, stating that he was planning to propose a small package of HEA-related bills, including a permanent authorization for Title III funding. Ranking Member Senator Murray, however, opposed Senator Alexander’s approach to circumventing a comprehensive HEA reauthorization bill, and the Title III authorization lapsed. The Department of Education has indicated that the institutional funding will be available for the current academic year, but without action by Congress to reinstate the authorization, institutions who rely on these funds are in untenable financial uncertainty.

Senator Alexander introduced a package of HEA-related legislation under the title “Student Aid Improvement Act of 2019” on September 27, 2019. Two weeks later, House Democrats released a comprehensive HEA reauthorization bill, “The College Affordability Act.” While neither bill is expected to progress to votes on the floor of their respective chambers, both indicate how members of Congress are directing their attention on issues of higher education. 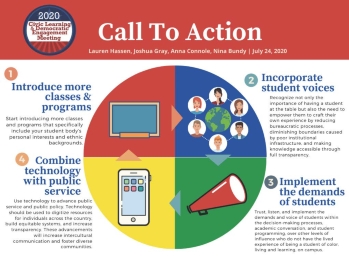 A Call to Action: Student Perspectives and Next Steps on Righting Historical Wrongs 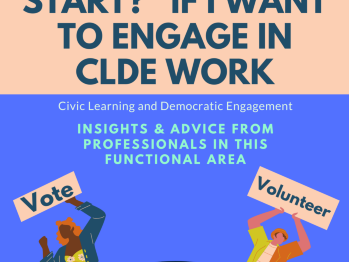 “Where Do I Start?” If I Want To Engage in CLDE Work.