Town-gown relations are often about the basics: student behavior, and land use issues, and these issues have been around for many years.  Gavazzi (2020) describes the connection as a marriage without vows, for better or worse, in sickness and in health.Pile on a global pandemic and the relationship between local governments in college communities and the higher education institution has been quite stressed.

Without students, faculty and staff behaving in ways similar to previous years, the impact to the economy was immediately noticed in March.  People stayed home and a mishmash of regulations and governing bodies proclaimed a variety of measures including mask mandates, no mask mandates, bar and restaurant closures, takeout only, etc. with each community handling things differently.  Many institutions stopped face to face classes and moved quickly to some form of distance education to conclude Spring semester, and immediately began planning for Summer and Fall semesters. Some schools continued with  distance learning only and did not resume on-campus living, while other institutions elected to reopen as much as possible.  Either way, the economic impact was huge in a variety of host communities as people shifted their spending behavior during the pandemic.

Beyond the general impacts of the pandemic on the economy, decisions made by the colleges and universities of how to proceed during Fall 2020 and Spring 2021 has added to the strain on the relationship between local government and its higher education leadership.  College students returned to their campuses in time for fall semester, shaking off the very long spring/summer of pandemic isolation with nowhere to go.  It was not a surprise to epidemiologists that college communities saw spikes in cases as young people socialized and infected each other.  Hot spots around the country mirrored where large pockets of college-age students had just arrived. 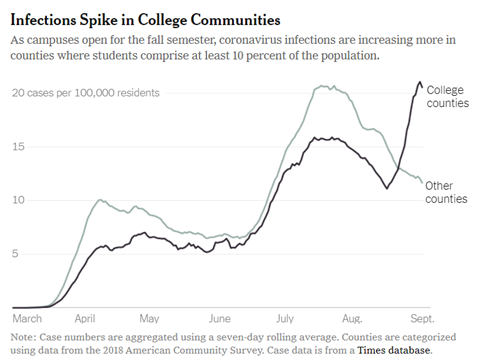 As schools reopened, some adjusted quickly from face to face to distance learning for a short time or for the rest of the semester based on how quickly things escalated.  Some institutions never changed anything and essentially continued on as planned, such as the University of Georgia in Athens.  Madison, home to the University of Wisconsin, tried very hard to impact actions on campus but wasn’t successful.  Boulder, Colorado, instituted a ban on gatherings of more than two persons in October after starting with zero gatherings.  The concerns of the communities around the nation escalated as the COVID-19 cases rose and institutions grappled with how to motivate student compliance with local ordinances and best practices. .

Adding into the turmoil is the return to collegiate sports, especially for institutions with competitive Division I football teams.  Changes in seating limits, masking requirements, and whether tailgating is allowed or not have all added to reduced spending in college communities where football ordinarily adds mightily to the economy.  Urban Wire had an early September outlook of such impacts, but plans have consistently changed in some conferences, specific universities, and communities as COVID cases and protocols have changed.  Ann Arbor, where the University of Michigan is situated, just ordered students to stay in their residences to stem an outbreak as of mid-October.  Outbreaks within football teams have added to the concerns for the players, coaches and fans on how to navigate the season while host communities are essentially left out of the decision-making for collegiate sports.

From a public policy perspective, both local governments as well as institutions of higher education are short on tools to change behavior of those who wish to socialize unsafely.  Without support from the federal government and some states’ governments, even mask mandates have turned into flashpoints of conflict.  Florida’s governor suggested that it was wrong for colleges to try to restrict behavior, even suggesting he would support a bill for the right of college students to party.  While the Beastie Boys and many college students might appreciate the governor's apparent willingness to fight for the right to party, campus leaders likely hold a different view.  Universities have historically been reluctant to extend their campus judicial system too far beyond the campus edges, and certainly not for civil violations like open containers or in this case, not wearing masks.  There are limits to what can be done with new or existing policies, and student affairs professionals are  exhausted from managing this pandemic for months on end.  Meanwhile, communities keep calling on the universities to figure out a plan to make it better but with little success.

In many locations, the college party continues on.  As the Washington Post asked in its September 24 article, “After months of planning and billions in spending, will colleges’ virus prevention efforts get trashed by a few student parties?”  Or in other words, will this marriage of town and gown be permanently damaged?  Time will tell, but the current strain on this proverbial town-gown marriage may take years to patch things up. 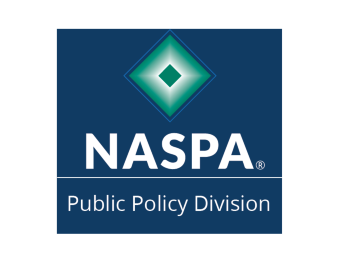